California Wine Country: You Have To Put Your Phone Away At Ernie’s Tin Bar

“I want to be a wine baron,” Jake stated as we sat at Buena Vista’s bar illuminated by the glowing picture of Count Agoston Haraszthy.

“Who doesn’t” I replied.

The evening before, our flight landed in San Francisco, thus beginning our road trip weaving east to Tahoe and then up to Portland.

END_OF_DOCUMENT_TOKEN_TO_BE_REPLACED

This weekend, a few of us attended the Fargo Beer Festival held in the Civic Center.  The event’s website boasted samples of “over 120 premium craft beers from around the world,” as well as food options including a pig roast for $23/ticket.

I’m more of a wine girl that a beer girl, but thought the event would be a fun opportunity to try new beers and check out the food.

We arrived at the beginning and waited in a relatively short line for the doors to open.  Wrist banded and tickets in hand, we stopped to review the Fargo Beer Festival Program.  I was very surprised to see that a large percentage of the beers were not those I would have considered “premium craft beers.”  They were varieties I commonly see but wouldn’t go to an event just to taste.  Some examples included seven varieties of Leinenkugel’s, Summit, Crispin Cider, Boulevard, Becks, Blue Moon, Dos Equis, Heineken, Sam Adams, Killian’s, Red Stripe, Corona & Corona Light, Amstel Light, and Pacifico.

The first room we explored contained the craft beers we were unfamiliar with.  Vendors sat at tables that lined the rooms’ perimeters and poured samples from bottles into tasting cups.  The lines for beer samples were never very long, except for about two tables sampling the most unique craft beers.  Although there were a couple of police offers stationed in each room, the crowd seemed to remain laid back and well-behaved, even though attendees could return to tables for multiple samples.

After I consumed about five samples, I felt a little bit drunk and quite full.  I warily eyed the enormous, foodless room and refrained from eating a young woman’s homemade pretzel necklace.  Three more samples later, we called it quits and searched for food.  The roasted pig wasn’t available yet, so I settled for Civic Center nachos with goopy cheese sauce, $2.50.  Maybe it was the beer food goggles, but the nacho cheese sauce hit the spot.  Ideally, I wold have loved to see snacks provided in the beer halls as well as additional food vendors, but props to the convention center for not inflating their food prices.

We indulged in a few more samples until the roasted pig was served. 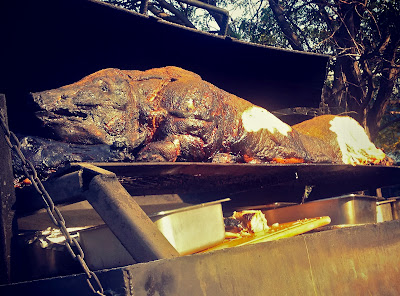 The roasted pig was provided by One on One Professional Catering, connected with the Garden Pavilion Restaurant and Banquet Facility. 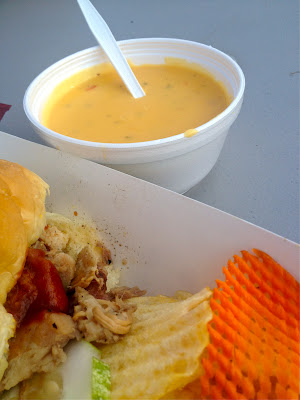 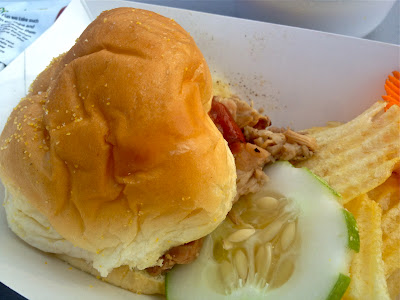 The pork was tender and succulent (who got the crispy skin?) and we heaped the sandwiches with barbecue sauce and grated horseradish.  The beer cheese soup was also tasty.  Slightly spicy and sweet with beer, although it had that viscous Cheez Whiz texture.  Bertrosa’s, located in Downtown Fargo, makes my favorite beer cheese soup ever.  It’s the spiciest version I’ve ever tasted and the only one that doesn’t have a shiny Cheez Whiz texture.  That being said, One to One’s was one of the better versions I’ve tasted.

Besides One To One and the Civic Center food stand, the only other food option was a local company at a table selling beef sticks.  You could buy 2 for $2 or a box for $25.  Jake bought a couple, though I passed since I thought they were too dry.

After dinner, I felt more than beered out.  The boys indulged in a few more samples while I sobered up and people-watched.  I was impressed with Night Owl Driving, who was stationed outside the Civic Center to offer attendees free rides home.

Closing thoughts. . .
I’ve come to the conclusion that I just might not like beer.  Cheap beer or craft beer, I’m just not that into it.  Just give me a light Mexican beer with lime or Sapporo.

The event was generally fun and I didn’t see one person getting sick or rowdy.

The lines were short, except for those sampling legitimate craft beers like abbey ales and other brews not available in every liquor store (event organizers should take this hint).

We enjoyed trying some of the newer or more unusual craft beer varieties, however, I wasn’t that impressed with much of the beer selection.  Especially considering that the event advertised, “over 120 premium craft beers.”  I should have probably taken a look at event website’s beer list beforehand.  Jake adds that if you can easily buy certain beers in Midwestern grocery stores or gas stations, they probably shouldn’t be advertised as premium craft beers.  I actually like Corona Light, but the fact that it was sampled at this event made me giggle.  Scratch some of the series of beers ordered by the pitchers at Midwestern bars everywhere, and replace them with craft brews that we’re not all entirely familiar with.

My favorite part of the event was the roasted pork and beer cheese soup.  I know the focus of the event is beer, but beer really needs food.  A few more vendors or conveniently located snacks might have made it easier to sample beers, sober, and also attracted a greater number of people who may like beer and love food.

Would we go again?  Probably not.

Once was fun.  Once was enough.