It’s been way too long since I’ve attended a a summer food and culture festival.

Our friends randomly asked if we wanted to check out a Greek Festival so off we went.  St. George’s Greek Festival occurred last weekend (August 18-19th).

I have no idea how many years this festival has occurred, but my guess is many.

Volunteers warmly welcomed guests and served a variety of foods and beverages.

Entrees included gyros, different types of kabobs (souvlaki), moussaka and spanakopita. We got so full on savory food that we left no room for dessert. Not even the baklava sundae.

The food and beverages here were affordable and very good. We grabbed some Greek beer and wines beforehand.

END_OF_DOCUMENT_TOKEN_TO_BE_REPLACED

Gyropolis: On my stormy relationship with gyros

I used to hate Gyros and I can thank summer Bible camp for that.

My sordid history regarding gyros
During the majority of my childhood summers, I attended a week-long, Christian Bible camp in Amery, Wisconsin.  As a special programming activity, one evening’s dinner was transformed into a foraging experience.  Our dinner was dissected into separate elements and we had to walk from station to station to accumulate elements of our meal.  We were forced to wander around the camp in search of our main entree at one station, soup at another, and so forth.  At each stop, we earned a stamp on our faux passport.

For my first few years at summer camp, I looked forward to this dining event when it was internationally themed.  The main entree station consisted of gyros filled with slimy, rectangular slices of mystery meat which I happily chased down with a churro.  I found the gyros to be edible and more compelling than normal summer camp options, but never had the desire to seek gyros, until recently.  One year, I was stunned when breakfast meant a single, pop tart-sized puck of ham/cheese/potato/egg on a plate.

Campers wandered around the property and endured long lines at each station, only to collect burgers and tots with a passport.

These days I like gyros.  In fact, I often crave them.  My favorite version is from Gyropolis, located in Bloomington. 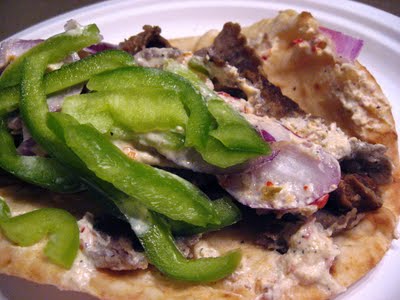 Jake and I always order spicy gyros.  At Gyropolis, the meat is sliced from a rotisserie and placed in a fresh pita instead of sizzling on a griddle.  Even without griddle-time, the meat has crispy edges and a firm texture.  Next, fresh romaine and crisp slices of green pepper and red onion are carefully added.  Gyropolis avoids the soggy mess that arises from adding shredded iceberg lettuce and mealy tomatoes to freshly griddled gyro meat.  Am I alone in loathing the smell of warm, wilting iceberg lettuce?
A spicy, cucumber sauce lends some refreshing heat.  Some days it’s spicier than others.  This evening, we won the lottery and the sauce was extra spicy. 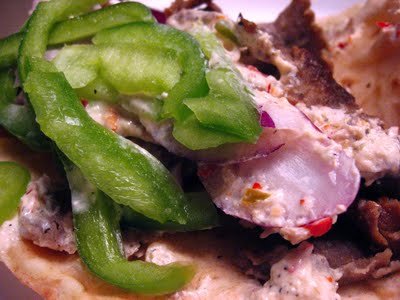 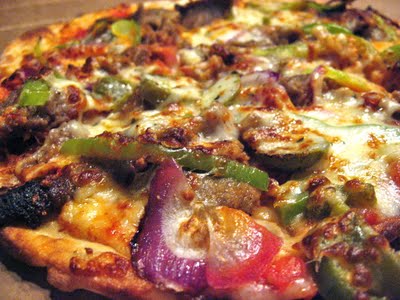 Jake’s favorite item at Gyropolis is this Fiery Pizza.  According to the menu, the pizza can be made on a 6″ pita or a 10″ hand-tossed crust.  The crust is chewy instead of crispy, which doesn’t bother us.  Jake orders this pizza with gyro meat rather than spicy chicken.  In addition to meat, the pizza consists of spicy pizza sauce, onions, green peppers, mozzarella, jalapenos, and oregano.  Personally, I find the pizza sauce to be delicious, on the sweeter side, and lacking heat. However, more heat comes from the jalapenos. 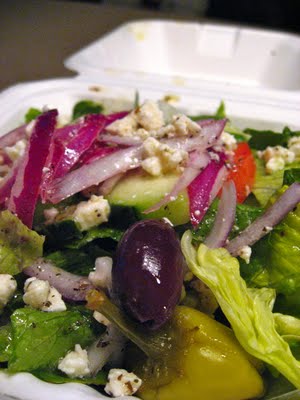 Gyropolis makes a fresh Greek salad with iceburg and romaine lettuces, black olives, feta cheese, red onions, green peppers, cucumber, tomato and the obligatory pepperocini.  I have yet to find a piece of lettuce with a browned edge and always eat the pepperocini first.

Besides the freshness of the vegetables, I appreciate the light salad dressing.  I am repulsed by ooey-gooey, artificially emulsified Greek dressings that reek of oregano.  This version is light, tasting of no more than oil, vinegar, and a few herbs. 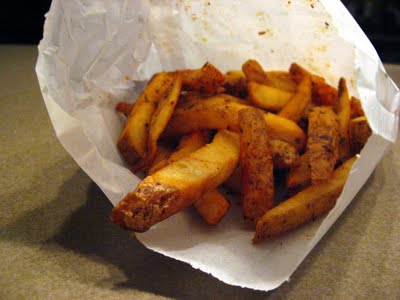 If you order a side of french fries, they are always freshly fried.  For a couple dollars you can order a reasonably portion of fries that are sprinkled with a seasoning salt mix containing a red spice that appears to be deceptively spicy.  These fries hit the spot alongside a gyro but aren’t particularly memorable or crave-worthy on their own.

Gyropolis has helped me to re-define gyros.  My only criticism is that, as far as I can tell, you must buy everything a la carte.  So far, I haven’t found a better quality alternative and am happy to pay the slightly higher cost.  If you have tasted a better gyro I would love to learn more about your recommendation.