My week in tacos: Courtesy of El Burrito Mercado

Remembering my rapture-worthy tacos from Los Ocampos, I shopped for this week’s groceries at El Burrito Mercado, located in West St. Paul.  “Taco Tuesday” might be your thing, but I wanted enough ingredients to supply a “Taco Week 24/7 week.”

A vendor located outside El Burrito Mercado sells fresh roasted corn, elote, and mangos on sticks covered in lime and chili.  I ate the most delicious elote and mango/chili popsicle in Queretero and look forward to trying this vendor on my next visit.  Last year, I tried elote from Los Ocampos and was disappointed by my small ear of waterlogged corn.  Was this just a bad night, and where else can I find elote?


At the meat counter, I bought a pound each of carne al pastor and cecina, thin, flat sheets of salted and slightly dried beef.  I also bought black beans, Salsa de Arbol and Drunken Salsa from the deli.  These salsas were marked with the store’s maximum spice rating of three chili peppers.

I simply heated a grill pan to medium high and sauteed the meat.  I chopped the fresh pineapple ring that was included in marinade, and sauteed the fruit along with the meat.  The cooked carne al pastor was tender and juicy.  The marinade was flavorfully spiced and “cuminy” while the fruit added some well-balanced sweetness.  The carne al pastor didn’t quite remind me of the spinning meat cones of Puebla, Los Ocampos, or La Hacienda due to its marinade flavor, but it was tender and delicious.  I would certainly buy this meat again, especially at $3.99/lb. 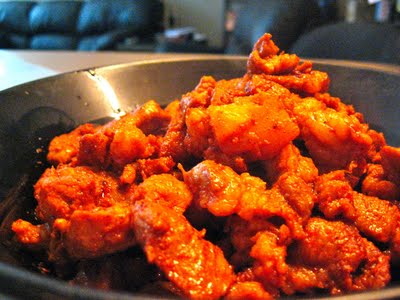 Cecina
Last month when I tried La Hacienda, located in the Mercado Central, Minneapolis, I enjoyed a taco filled with cecina.

I bought a pound of cecina which cost about $5.99/lb, chopped the meat into small pieces, and sauteed in a hot grill pan.  Because I did not rinse and dry the raw meat before cooking, the cecina was inedibly salty.  A quick Google search informed me to rinse cecina before cooking, reminding me to Google unknown ingredients first, and cook second.

In order to save the meat, I rinsed the cooked meat pieces in water twice, and re-sauteed in a hot pan with a lot of olive oil.  Despite my misstep, the meat still tasted really good.  The residual saltiness offset the blandness of the corn tortillas. 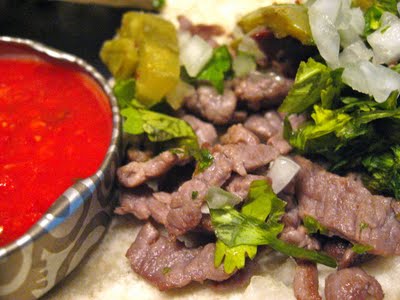 The raw cecina was difficult to cut and I predicted the meat would be tough, however the cooked cecina was very tender.  I savored the carne al pastor and cecina equally while Jake preferred the cecina.

I served the meat along with finely chopped onion, cilantro, lime wedges, and corn tortillas I heated in the oven, in addition to El Burrito Mercado’s prepared black beans and salsas. 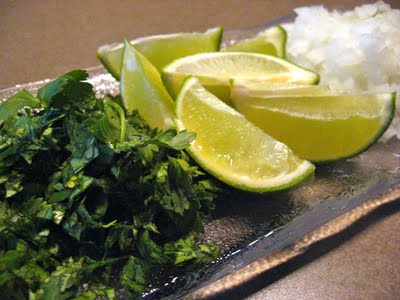 Until I spent time in Mexico, I did not understand the allure of dousing most foods in lime, chili, and salt.  Now, I can’t get enough of lime, chile, cilantro, raw onion, and salt.  I veer from Scott Conant’s “raw onions make everything a dirty travesty” mantra.

These creamy black beans had a nice firm texture and garlicky scent.  Even though I like salty foods, I felt the beans were a touch too salty, but not inedibly so.  I would love to try making my own batch of black beans during a less busy week.
﻿

﻿
I am addicted to El Burrito Mercado’s fresh salsa bar.  For the past two visits, I bought their green, drunken salsa.  This spicy salsa is chunky and contains peppers, onions, and fresh avocado.  I can’t remember why this salsa is so tipsy but recollect it may contain tequila.  The red Salsa de Arbol is given the same three chili pepper heat rating, but tastes less spicy than the Drunken Salsa.  It’s like Chipotle’s hottest salsa.  Except better.

For the first time, I bought some cactus paddles.  Online, I was instructed to trim off the edges, scrape away the spines, and boil for 15 minutes.  I added the cooked cactus to the tacos and to cheese quesadillas.

I would welcome any suggestions on cooking un-slimy cactus.  There ares still five cactus paddles dwelling in my fridge.