I Think This Is How You Heal A Broken Heart

You don’t just want your food to make you sweat, you want a cathartic, painful, out-of-body experience due fueled by spice, chilis and serotonin.

I think this is how you heal a broken heart.

Once in a while discussion threads appear on Twitter and Reddit; Someone will ask where to find the spiciest food in the Twin Cities and people respond.

END_OF_DOCUMENT_TOKEN_TO_BE_REPLACED

September 12, 2011 / Jeni / 0 Comments
Pho 79/Caravelle
2529 Nicollet Avenue South
Minneapolis, MN 55404
This weekend, we celebrated the marriage of Jake’s cousin Kaelynn and her husband Tanner.  Jake’s uncle manages the Embassy Suites kitchen (among others) in Bloomington, and the family put together a stunning menu for the evening.  We feasted on a mountain of crab claws, halibut, rare beef, and chocolate covered strawberries.
I have never seen so many people drinking Scooby Snacks.  I have never seen or heard of a Scooby Snack.  I must have missed something during my undergrad years.  What can I say?  I was a nerd.  I am hesitant to admit we were busy running around in giant bunny suits and terrorizing motorists with a mannequin head mounted on a stick completely sober.  And it’s probably a good thing we couldn’t get our hands on absinthe.  I did learn that my new favorite drink is a White Russian (even though I didn’t love The Big Lebowski).  Are Scooby Snacks a Minnesota thing?  In Iowa, everyone drank Boulevards, but I have never seen anyone drink one in the Twin Cities.
We’re also chipping away at the never ending task of preparing our condominium for listings and showings.
For my upcoming birthday, Jake decided he wanted to make our Twin Cities restaurant bucket list quest official.  Friday evening, we headed towards Eat Street to dine at Pho 79.  I have eaten here many times, but the last occasion was at least a year and a half ago.  When I worked in downtown Minneapolis, I enjoyed eating at the lunch buffet which was surprisingly good.  It took two years to finally bring Jake here to try his first bowl of pho.
To begin, we each ordered an appetizer.  Jake chose fresh spring rolls, $3.29. 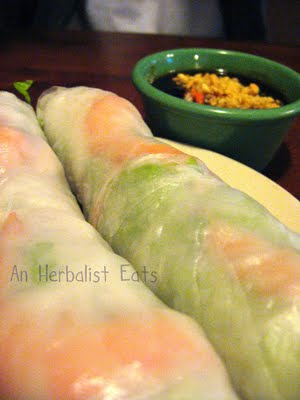 The spring rolls were filled with lettuce, herbs, thin slices of roasted pork, and shrimp.  The dipping sauce tasted like hoisin sprinkled with crushed peanuts.  I thought the spring rolls were refreshing, however I wished for more herbs and the shrimp tasted a little ripe.  We enjoyed dipping the rolls in the sauce mixed with sriracha.
I ordered the fried sweet potatoes with shrimp, $3.99. 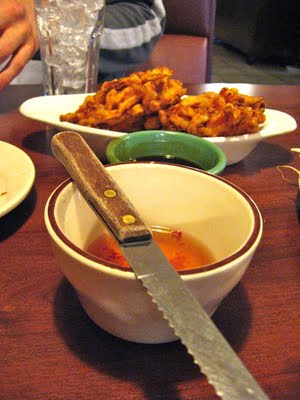 We were delivered two large tangles of fried sweet potato strand and small, peeled shrimp knit together in a batter.  The crunchy sweet potato and shrimp knots were served with a sweet fish sauce dressing and a large knife.  We were so famished we did not bother with the giant knife, and dove in with our bare hands. 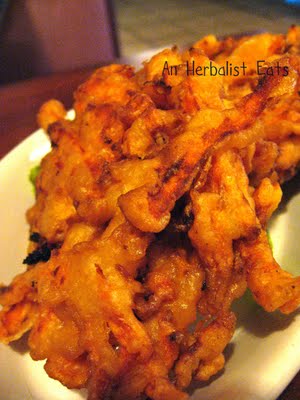 This nests were a bit greasy even for me, so I dabbed them with a napkin with optimal results.  Nevertheless, we found the fried nests addictive.
Prior to our pho, we were brought a plate generously mounded with thai basil, bean sprouts, slices of jalapenos, and lime wedges. 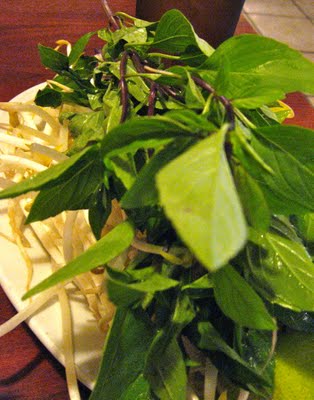 These garnishes were so fresh.  The beansprouts were plump and crunchy and the basil looked freshly picked.  Nary was there a basil leaf with a browned edge or yellowed sprout.
I ordered the pho with rare, lean beef while Jake ordered the same thing with the addition of brisket.   In the past, I found the brisket to be dry.  Each bowl cost under $7.  We were both too unadventurous to order pho with tripe or tendon. 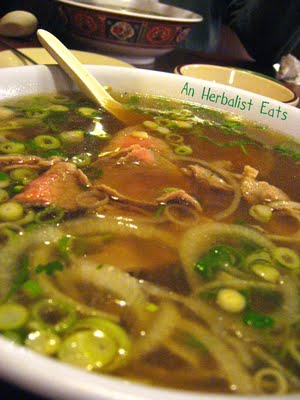 We would both really like to try tripe, but have not worked up the courage yet.  What stands in the way between me and tripe is my aversion to poo. . . we would be open to suggestions regarding local tripe dishes for the uninitiated.  I should probably add tripe to our bucket list.
If one of my dining companions tripe, I would totally try it, but this has never happened thus far.  Despite my bug phobia, I did eat a giant grasshopper from a vendor located on the steps scaling a giant pyramid in Cholula, Mexico.  This vendor proudly offered us a sample and it felt ungracious to act fearful.  And so Jeni channeled her Andrew Zimmern and ate a bug. 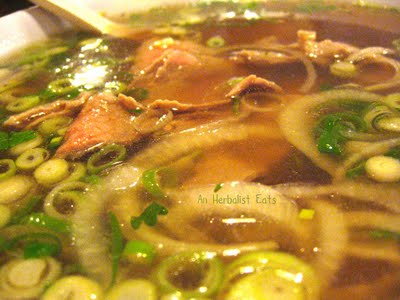 Enough about that.  Back to the pho.  I haven’t eaten many versions of pho because I am compelled to keep returning to Pho 79.  Their broth is rich and satisfying, hardly one note or tiring to the palate.  The rare beef slices were beefy and tender and I was impressed with the quantity of beef.  The soup also contained plenty of thin slices of crunchy white and green onion.  A giant tangle of rice noodles was cooked al dente.
Jake and I customized our bowls with our own ratios of garnishes.  I also added lime for brightness, sriracha for heat, and hoisin for sweetness.
I hardly made a dent in my pho and the owner expertly poured the soup from its wide bowl, guiding the liquid, with chopsticks, into a container to bring home.
Jake enjoyed his first pho experience and said it was one of the best, first food experiences he has ever had.
Congratulations Kaelynn and Tanner.  Thank you to the Breen and Steinlicht Families.

May 19, 2011 / Jeni / 2 Comments
Hoang Thien Y Deli
2738 Nicollet Avenue
Minneapolis, MN 55428
Today I felt like a sandwich.  That is, I felt like eating a sandwich.
Let me state that I am no bahn mi expert.  (Let me state that I also realize I am missing some symbols for proper Vietnamese punctuation.  The blogger unpredictably adds anywhere from 2-10 inches of space between random lines of text if I copy and paste words from online).
When I lived in Minneapolis, it was more convenient to explore Eat Street.  One day, I tried this deli after reading this Citypages article: http://www.citypages.com/2008-09-17/restaurants/very-vietnam/
I returned for bahn mi sandwiches when such cravings hit.  I haven’t eaten here for over a year and stopped in for a take-out lunch on the way home from class.
This visit, I found the pork to be a bit dryer than what I remembered and the bun tasted slightly stale.  However, the sandwich contained my ideal balance of crisp, pickled vegetables and fresh herbs.  I have been disappointed by other local bahn mi sandwiches because they contained skimpy strands of soggy vegetables.
The bread was on the chewy side, but I would prefer chewy bread over an overly dried/crusty bread that destroys my mouth.  Hoang Thien Y Deli adds the most delicious spreads to these sandwiches.  I can’t tell what these creamy spreads are made of but I love their added savory richness.  My prediction is that they involve butter and pâté. 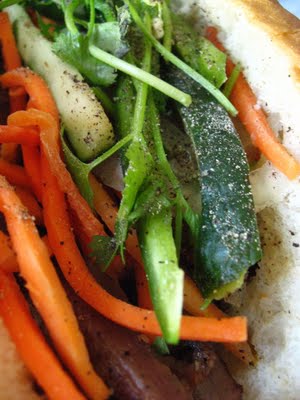 Lastly, this deli adds a thoughtful sprinkle of salt and black pepper, which makes all the difference in the world.  In the picture above, the salt and pepper sprinkle may appear excessive, but I think it’s perfectly balanced.  Each sandwich was carefully and thoughtfully created by the kind staff.  Although the pork and bread were didn’t quite live up to my memories from my last visits, I devoured my sandwich.  I brought home to Jake his first Bahn Mi, and he also devoured his sandwich giving it high marks. 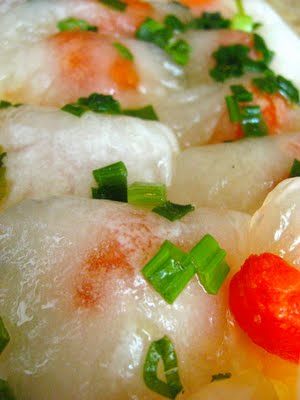 The check-out counter is a display of various dumplings, eggrolls, and rice creations I haven’t seen or tried before. The deli offered a few hot steam table offerings such as chicken feet, chicken wings, meatballs, and fish. I grabbed a package of some kind of dumpling made with a glutinous wrapper,  filled with shrimp, and sprinkled with green onion.  The dumplings were packed with a container of a sweet, fish sauce-based, dipping sauce. 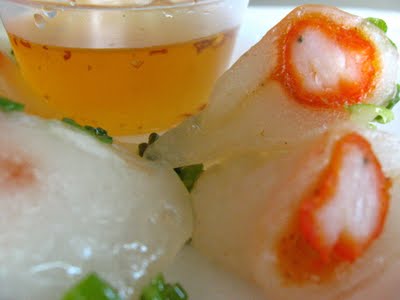 The thick wrappers were sticky to the touch, chewy, and bland but inoffensive.  I found myself wishing for more salt, herbs, or acidity to counter the wrappers.  Inside was a small bit of shrimp.  I am curious how the shrimp was cooked.  The outside of the shrimp was a red color and the texture was very firm.  The meat almost tasted slightly dried or smoked.

My total bill for two large bahn mi sandwiches and package of dumplings was $10.

The woman who assisted me at the deli had tried to steer me toward a package of small dumplings wrapped in what looked like banana or plantain leaves.  Next time, I would like to take her advice.  As James Norton has mentioned, the menu is extremely affordable and Hoang Thien Y Deli offers items I haven’t seen at other Vietnamese restaurants.

When I return I would like to try the bun rieu, a noodle soup with crabmeat, fried tofu, and tomatoes, and bahn mi with meatballs.  I also noticed they offered ban xiao crepes filled with shrimp and pork.

Eat Street preferences
So far, I have preferred Bahn Mi’s at Hoang Thien Y Deli, Bun noodle salad and Thai tea at Jasmine Deli, and Pho at Pho 79.  I would welcome any recommendations or thoughts.

Judge me not by the number of pizza boxes I carry

Added another spot to my MPLS skyway post (in alph

The Gobi Manchurian cauliflower bites are 🔥 One