Weekends in the Twin Cities are wonderful, though they leave us scrambling for breath as we return, racing back to work.

Amidst the excitement of last weekend’s TECHmunch and family festivities, our parents collaborated on planning a surprise engagement dinner at Heartland.  If I had been quicker on my feet, I would have arranged my own surprise by ordering our marriage paperwork from the county and a pastor to meet us at dinner.
Our parents have only met on one occasion and so I was a little anxious about the gathering of our families.  I ordered something green and something strong.  I don’t remember what it contained besides lime juice and gin, but what I do remember is that it was extremely strong.  I coughed my way through the first few sips and resolved to drink it slowly, lest I take down my own engagement dinner. 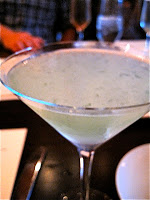 One of our servers seemed concerned that it remained so full.  He checked in a few times to ask if I was enjoying the beverage.  I tried to reassure him that although it was delightful, it was incredibly strong for my likes.
I steadily sipped the the drink and even passed it around for others to enjoy.  Somehow, we hardly made a dent.
We had a grand time enjoying each others’ company and tasting all of the dishes.  On this evening, chicken reigned supreme.  Those of us who ordered the Fauna tasting menu began with a small piece of moist, crispy-skinned chicken. 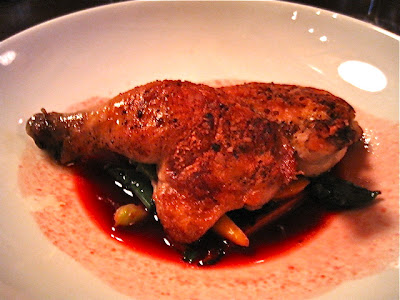 It rested on sweet, beautifully cooked vegetables and vibrant beet broth.  Even the most cautious of eaters declared it the best chicken he had ever eaten.
Five others ordered the chicken entree.  Again, lots of crispy, seasoned skin and succulent meat.  Even the white meat was buttery tender and flavorful.
This past Thursday, I picked up our first CSA box from Bluebird Gardens of Fergus Falls, MN.  After months of receiving anticipatory emails updates, I giddily unloaded our first bounty onto our kitchen counter.  I gently examined the delicate lettuce, radishes, spinach, spring onions, a petite kohlrabi, and my favorite; a bag of pea sprouts. 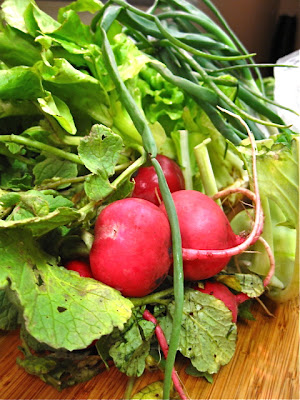 Processing the vegetables and stuffing them into our fridge took time, but was well worth the effort.  Now, I can easily grab the vegetables and incorporate them into our meals.  We’ve been feasting on giant fattoush salads made with toasted pita bread and everything in our box.  Let me know if you are willing to share any of your favorite uses for CSA vegetables.  Especially kohlrabi.  I didn’t hate my first taste of kohlrabi but am wondering how I will ever fall in love with it.
I plan to submit bimonthly updates about what I create with my CSA boxes to Simple, Good & Tasty.
Finally, there’s Ribfest at the Fargodome which began on Wednesday and ends this evening.  I’m surprised it’s open during so many weekdays, but I’ve been told that many request time off from work to attend.  Festivities include seven rib vendors, additional food and beverage vendors, a large music stage that features 80’s hair bands and country music, and an expansive array of blow-up jumpy things. 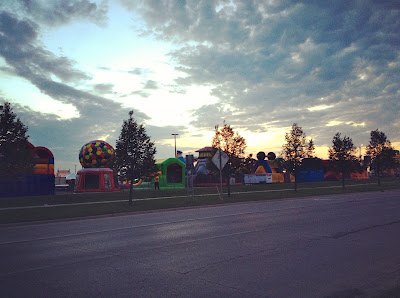 I think the blow-up jumpy things almost outnumber the rib vendors 2:1.
Last evening, we visited Ribfest and sampled ribs from two vendors.  Cowboys BBQ & Rib Co. of Forth Worth Texas boasted an extensive array of awards but their ribs were woefully tough and covered in flabby skin.  I hope this can be chalked-up to a bad evening.  Otherwise, I can’t imagine them winning anything. 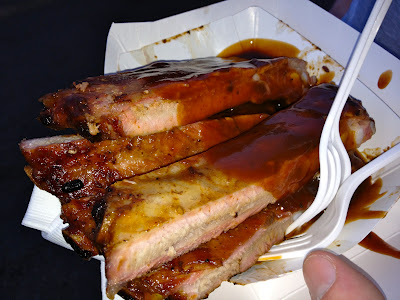 On a positive note, I enjoyed their barbecue sauce which seemed well-balanced.
We also tried ribs from Aussom Aussie’s BBQ of Pittsburgh.  These were much better. 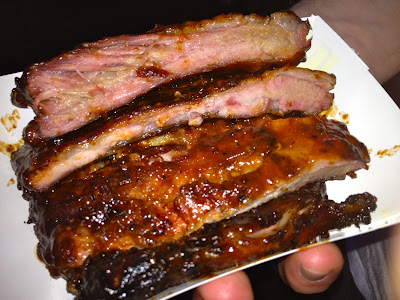 The meat had a better texture and a smokier flavor, though they were slightly fatty.  The exterior had some bark and the sauce was lovely.  It had a little heat and that vinegary note that I love so much about Ted Cook’s.
We’re hoping to return for a blooming onion and to sample some more rib vendors.

I narrowly escaped the jaws of the Velocirapture.  And so I wish my fellow, un-raptured foodie sinners a happy May 22nd.

In middle school, my teacher showed an intensely dramatized video about the rapture in Bible class.  The sudden disappearance of people led to car and plane crashes.  Those who were left behind followed the Antichrist and his identifying tattoo procedure, or faced violence and gunfire.  After class, my friend and I sat in a corner, in stunned horror, whispering about the rapture.

In high school, I worked at a local Christian bookstore and shelved encyclopedia-sized series of apocalypse-themed books, audio books, games, charts, and software for adults and children.  Did you know you can also purchase an instructional book in case you are not raptured?

In college, I completed a summer internship at a New Orleans church a year after Hurricane Katrina.  One youth group demonstrated the aerodynamic complications of rapture whiplash, as they jumped into the air with their heads tilted to one side.  Damn gravity.

La Sirena Gorda
Last year I ate the most delicious and spicy seafood soup from La Sirena Gorda, which alas, was not available this evening.  I chose ceviche instead.

My takeout container held a large scoop of fresh, fish ceviche that sat on a corn tostada covered with a thin layer of a mayonnaise sauce.  The fish was firm and garnished with jalapeno, onion, cabbage, creamy avocado, and a slightly spicy red sauce.  I enjoyed the acidic balance of this ceviche and felt no desire for extra lime or salt.  Five, freshly fried corn chips adorned the fish.

Los Ocampos
Eating tacos in Mexico has ruined Chipotle for me.  I tried to eat carnitas tacos from Chipotle, post-Mexico, and made a face as I bit into soft, doughy, mealy-cheesed blandness.

Although nothing compares to the cripsy, rotating al pastor meat cones of Puebla, these tacos hit the spot. (I ordered three tacos and discovered I received four once I got home).  A soft, double layer of corn tortillas cradled the moist, griddled meat.  The accompanying red and green salsas were flavorful and packed a comfortable spiciness level.  On the way home, I guzzled a medium horchata, $2.25.

I’ve come to prefer my tacos simply garnished with onion, cilantro, and lime.

Compared to the tacos al pastor at La Hacienda from Mercado Central, the meat was moister, cut into larger chunks, and missing a slight hint of sweetness.  My only minor criticism is that I felt the need to add pinch of salt to every taco (which seemed acceptable in Mexico).  I have no regrets about my last dinner choices as both the ceviche and tacos al pastor were satisfying.

Ted Cook’s 19th Hole Barbecue
Usually I would happily join Jake in a Ted Cook’s pig out, but felt an insatiable craving for tacos al pastor instead.  Ted Cook’s is included in our comfort food rotation and we adore their pork ribs covered in a spicy barbecue sauce.

Tonight, the ribs were especially tender.  I am a borderline barbecue snob in which I expect an authentic smoke ring and become irritated when the meat falls off the bone.  I want my meat firmly attached to the bone but easy to nibble off.  The spicy barbecue sauce is slightly sweet and vinegary.  Ribs ordered as part of a meal are blanketed in thin slices of fried potatoes whose texture varies from soggy to crispy.  As you can see, I delicately peeled back the potato layer to expose the ribs and felt oddly like a food surgeon.  I like to use the potatoes to wipe up every drop of sauce.

Jake always orders a large serving of tender baked beans.  I enjoy these beans because the sauce isn’t too sugary, tastes of garlic powder, and includes small bits of smoked meat.  Meals also arrive with a slice of soft bread and small cup of coleslaw.

As we shared our last dinner choices, we discussed such things as arriving at his cousin’s engagement party before six p.m. to avoid unmanned cars on the freeway and watched Lady Gaga’s Monster Ball.  Did anyone else notice that her dialogue between songs is reminiscent of Frau Farbissina of Austin Powers?

The next morning, we awoke to learn that New Zealand was still intact and hoped for an excuse to indulge in another last meal.

I kicked myself for putting off an article analysis in faux rapture anticipation.

The Veggie (or chicken) fantastic is always a plea

Couldn’t say no when @hotindianfoods came to wor

This dressing from #traderjoes is so good. Reminds

I should branch out but.
I think Colita is legit

Delight is unexpectedly receiving a warm cup of ho

New post up: The ten best things I ate this year.