Only Got $20 In My Pocket: Fargo’s European Market

It’s an exciting time to live in Fargo-Moorhead. Two, internationally-influenced markets opened, just within the past five months. Katerina Berg opened the European Market in the late fall and, in February, four individuals from Bhutan opened the Himalayan Grocery.

The European Market is located in Downtown Fargo, down the sidewalk from Nichole’s Fine Pastry. Their Facebook updates describe their latest deliveries from the East Coast including pastries, cheeses, and cured meats. In early January, Forum reporter John Lamb wrote about his visit to the Market and the foods he sampled. I stopped in this past weekend to check it out for myself.

The shop is tiny but features a cross-section of foods from Eastern Europe and Russia. Its selection is limited, but thoughtful, as if the proprietor cut to the chase and picked out her favorite things to feature. I chose a bag of frozen beef and pork pelmini dumplings from the frozen foods case that also contains frozen blintzes, and additional pelmini varieties in both a veal and sweet variety. Across from the frozen section is a shelf of dry goods. I grabbed a jar of sweet and spicy eggplant spread and buttery crackers. I was also intrigued by jars of fruit preserves and tiny, pickled patty pan squash, though I passed on this visit.

Next, I visited the deli counters featuring cheeses and cured meats. I tend to be a shy and slightly bashful person, but I’m glad I asked Katerina for suggestions. She encouraged me to sample a variety of cheeses, from smoked Gouda to a mild, dimpled cheese from Lithuania. I noticed a few more cheeses in the refrigerated cooler. One appeared soft and spreadable, while another reminded me of feta. Next time, I’ll explore the cured meats. Finally, the cooler to the left of the cheese case features fancy desserts. Tidy rectangles of layered cakes and pastries in all colors. Like the rest of the store’s offerings, they, too, were affordable.

This is frickin’ awesome. 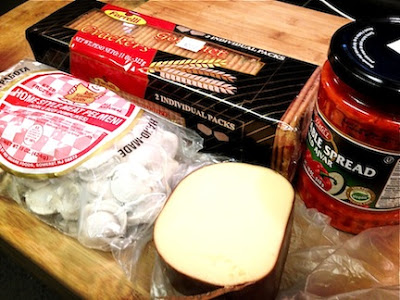 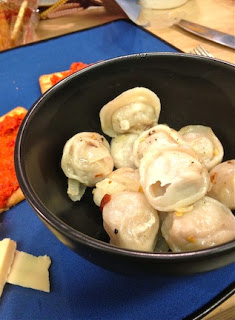 Katerina instructed me to boil the pelmini for seven minutes in salted, boiling water along with a bay leaf and enjoy them with ketchup or sour cream. After I boiled the dumplings, I tossed them into a pan and sauteed them with butter infused with caramelized onions and hot chili.

They were porky and succulent. A nice lunch for two (with leftovers) for $4 a bag. My friend, Yuliya, who coordinates the local Fargo Foodies Network in Fargo makes her own pelmini and recommended this video tutorial. She fills hers with ground beef, garlic, and green onion and serves them with sour cream and sprinkled with dill.

While I was exploring the European market, a couple popped in to visit. They looked around and left without trying anything. Confronting a deli case filled with unfamiliar meats and cheeses can feel intimidating, but don’t be afraid to ask for suggestions or samples. I’ve rarely met a propriator unwilling to show off his or her favorite foods.