This past week’s spring break was a good example of how even the best laid schemes can go awry.

One morning, I planned to drive to the Twin Cities to visit a some friends. My last solo trip was interrupted by a blizzard and all of the major freeways surrounding Fargo-Moorhead were closed. This happens out here. They really close the freeways.

I was desperate to go to the Twin Cities. Spring break’s fluctuating weather left me stir crazy. Plus, I felt guilty for mistaking the date of a get-together I initiated. My friends were kind to rearrange their schedules and I wanted to attempt the drive. With nothing more than a soda and a backpack, I drove east on I-94, even though it had been closed earlier. I figured that as a seasoned Midwesterner with new tires, the roads couldn’t possibly be that bad. After all, the MN Department of Transportation traffic map categorized the roads as challenging and I am usually up for a challenge.

The road becomes icy and I witness a frightening car accident when someone pulls around my car to pass me. They whiz past me and I watch as they begin to spin in circles and tumble into the ditch. For the first time in my life, I call 911. I panic and my hands shake so hard I can barely hold the phone. The dispatcher keeps asking me to better describe my location and I can’t. Finally, someone tells me they found my location from my phone. By the time I turn around at the next exit, the police and tow truck are at the scene and it looks like everyone is OK. I drive home going 45 miles an hour, even though a plow has already sanded the road. Cars and semis pass me, clearly frustrated, and I don’t give a damn because they didn’t see what I just saw.

I spent my last weekend of spring break at home. Sitting on and brooding in my wanderlust.

On a nicer day (keep in mind that I live in North Dakota, so nice implies non-lethal), I returned to Cafe 21 to try the Vietnamese banh mi sandwiches they only serve at lunch. To my knowledge, these are the only regularly offered banh mi sandwiches in Fargo-Moorhead. I have found cold cut banh mi sandwiches at the Asian market but they look like they are imported from the Twin Cities. I’m not a fan of the mysterious deli meats and feel some of the freshness is lost in transit.

We’ve previously enjoyed a couple dinners at Cafe 21, especially liking their fresh spring rolls and spicy ramen. I found their version of pork bulgogi to be less spicy and sweeter than the fiery versions my favorite Twin Cities Korean restaurants serve, but I’d still order it again. On this weekday, I ordered two banh mi sandwiches ($7 each) to go. One for me and one for Jake, who unsuccessfully tried to order one on our first visit. Cafe 21 only offers a roasted pork variety, but this happens to be my favorite. The server kindly brought me a glass of water as I waited for my order and 15 minutes later, I was on my way home.

Each sandwich was packed with a serving of french fries and small cups of ketchup and soy sauce. Their size struck me as less than or equal to those offered at Jasmine Deli located along Eat Street in Minneapolis. Jasmine’s grilled pork banh mi also cost $3.75, but this is Fargo where Banh Mi are still a novelty. 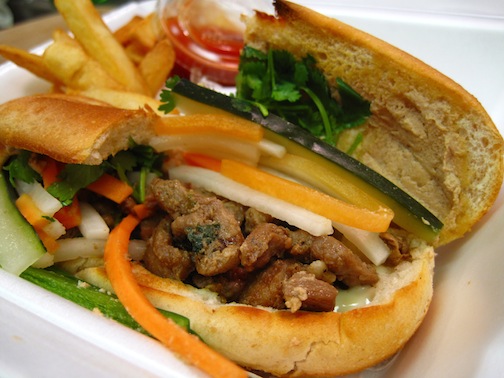 I found a lot to like about this sandwich. The pork had a satisfying savory flavor. There were a lot of sweet and sour pickled vegetables. Strands of fresh cilantro and jalapeno. A glistening of mayonnaise and, best of all, a thick smear of pate. It looked like banh mi’s I have loved and tasted like banh mi’s I have loved. Unfortunately, I felt the size was a little small and the bread was too hard. The bun was overly toasted and crunchy like a crouton. I sustained minor damage to the roof of my mouth.
The flavors were spot on and the fillings were fresh, but that bread. Overall, a good effort that’s decent enough to satisfy my banh mi cravings while in Fargo.