Coming To Terms With The Pioneer Woman: Dr. Pepper In My Pot Roast

I was a hesitant Pioneer Woman fan.

There was just something about her television show that annoyed me. Everything about Ree Drummond seemed too perky and too pristine. Her delivery was oh so deliberate. I much preferred the other new Food Network babe, Trisha Yearwood. She seemed like she’d be fun to grab a beer with and tell an occasional dirty joke.

On a lazy Saturday afternoon, I watched the Pioneer Woman prepare refreshments for her daughter’s sleepover party. Together, they traced shapes of their own hands onto sugar cookie dough. When the cookies finished baking, they showered them with icing and sparkles.

Damn it. I felt a sudden longing to make hand cookies with my mom. I made a mental note to make them with my daughter someday. And then, the Pioneer Woman didn’t seem so bad. In fact, I kind of liked her.

My husband and I recently picked up part of a beef share that came with a few roasts. The last time I attempted to make pot roast was in college and the result was dismal. Since then, I’ve also ruined a few other roasts and have been hesitant to cook large pieces of meat. I shared my pot roast woes with a coworker who recommended her foolproof crock-pot method. It involved Dr. Pepper, chipotle peppers, and The Pioneer Woman.

I stayed true to her recipe for Spicy Dr. Pepper Shredded Pork, keeping the chipotle peppers and soda. However, I added my own twists by substituting beef for pork and perching it on top of a full mess of mirepoix in a crock-pot. Finally, I turned the braising liquid into a silky, red winey gravy lightly thickened with roux.

Ingredients:
Beef roast with plenty of marbling. I used a blade roast that weighed about three pounds.
Oil
Salt
Black pepper
Mirepoix: Roughly chopped carrots, onions, and celery. Enough to cover the bottom of the crock pot.
Dr. Pepper, about half an inch or 12 oz.
Chipotle peppers and sauce. I used about 2/3 of a small can. I have a high heat tolerance and would use the whole can next time.

Instructions:
Place roughly chopped vegetables in the bottom of the slow cooker. Sprinkle with salt and pepper.

Brown all sides of the roast in a hot pan with some vegetable oil. Place the roast on top of the vegetables. Season both sides with salt and pepper. 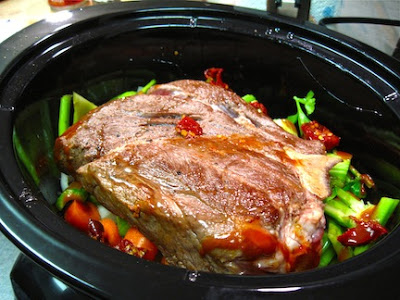 Pour Dr. Pepper and chipotle peppers and sauce over the roast. Cover and cook on low. My roast cooked for seven hours while I was at school.
Remove the roast from the pot and set aside. Strain the drippings into a small sauce pan. Press the cooked vegetables to collect all of the braising liquid. Skim the fat from the top of the liquid with a ladle, or let sit it in a cold place for a little while. The fat will congeal near the top and can easily be scraped away. 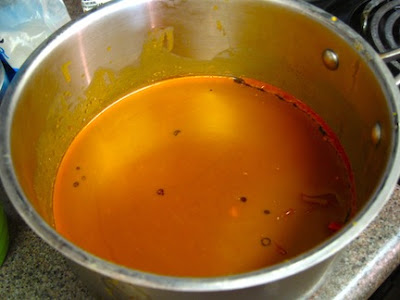 Add enough red wine to balance the sweet and spiciness of the soda and peppers. Season with herbs or spices, salt, and pepper. I added a little soy sauce for some umami and more of the chipotle pepper sauce. Reduce a little.

To make the roux, melt about half a stick of butter in a small pan. Gradually whisk in flour until the texture resembles wet sand. Try to coat every grain of flour with the fat. Cook until the roux smells toasty but do not burn. Set aside. 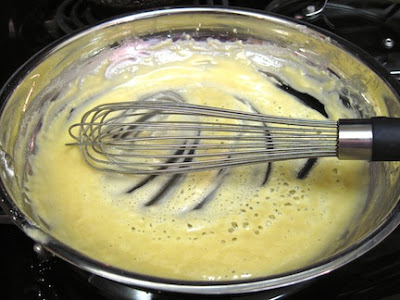 Once the sauce is heated, slowly whisk in one spoonful of roux at a time. Give the sauce time to thicken between spoonfuls of roux. Once you like the texture, stop. Add a little garlic. Check the sauce for seasoning and return to the crock-pot. 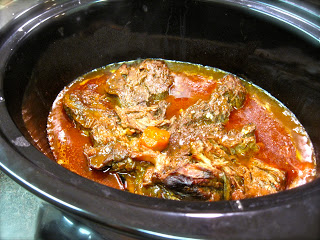 Roughly pull the beef into large pieces and return to the sauce. Set crock-pot to warm or low if the roast needs more tenderness. I served our pot roast along with leftover mashed potatoes from culinary school, sauteed mushrooms, and cabbage steamed in chicken stock.