A couple weeks ago, I mentioned visiting Cafe 21, a new restaurant in Fargo serving Japanese and Vietnamese dishes. We visited Cafe 21 soon after reading a positive review on FMFare, a new blog written by a fellow Fargoan.

In typical Jake and Jen style, we left for dinner after work on Friday and were in bed by 8:30 p.m. Because we’re awesome like that.

Cafe 21 is located in the same, covered strip mall as Leela Thai. It seems to have replaced Yuki Hana, a restaurant that served Japanese and Korean food. Our friends said Yuki Hana may have served Fargo-Moorhead’s only version of Bi Bim Bap, and a respectable one at that.  Too bad we never visited Yuki Hana before it closed.

I ordered a bowl of spicy kimchi ramen soup, $6, along with an unagi (eel) sushi roll $9. The server informed me the ramen also came with an egg. Jake chose an appetizer of fresh spring rolls, $5, and a beef pho, $8. 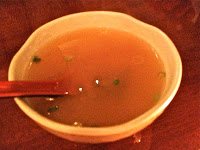 After ordering, our server offered us complimentary bowls of miso soup. I passed on my own bowl and tasted Jake’s instead.

This version of miso soup tasted much better than most of those we’ve tried at other Asian restaurants. It was also a little sweet. The miso swirled in delicate clouds without being gritty. I almost wished I hadn’t passed on my own bowl, except I knew I would have been too full for my entree of soup.

The spring rolls were stuffed with fresh vegetables, roasted pork, and shrimp and served with a thick, sweet dipping sauce laden with chopped peanuts. I would normally consider the sauce too sweet, except that it contrasted nicely with the savory, roasted pork. Jake thought the spring rolls were too heavy with lettuce, while I liked that they resembled salad. Sometimes I feel some restaurants overload their spring rolls with rice noodles, which I find redundant when they are wrapped in rice paper. 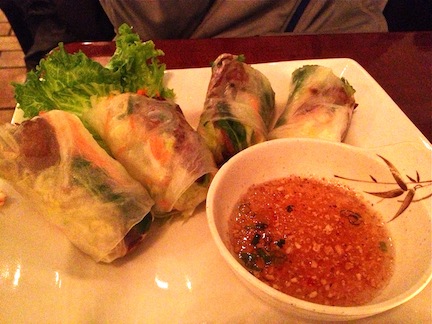 My eel sushi roll arrived as an appetizer with the spring rolls. 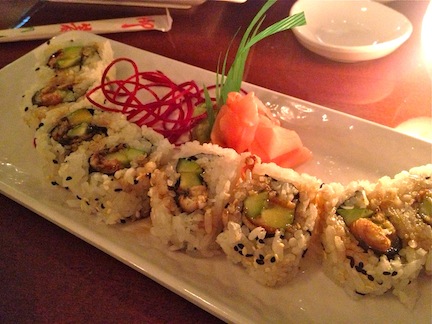 I noticed the eel sushi and sashimi were the most pricey fish options. That being said, I liked the flavor of the eel in this sushi roll. The portion size was also large. There wasn’t necessarily a lot of eel in each piece of sushi, but it didn’t taste fishy and the texture wasn’t mushy. Not the best unagi I’ve ever eaten, but far from the worst. The sushi rice was slightly warm and loosely packed and the rice grains appeared smaller than what I’ve typically seen in sushi.
I really enjoyed my bowl of spicy ramen in kimchi broth. For my tastes, the broth was pleasantly spicy which I seldom find in Fargo-Moorhead. 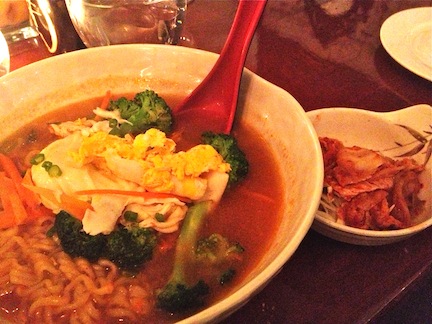 I’m not sure if the ramen broth was scratch-made or from a mix, but I’m guessing there was a bouillon component to it. I added a little hoisin and soy sauce to balance out the flavor. The carrots and broccoli were fresh and cooked al dente.
Plus, there’s the egg. I loved the egg. When I make spicy ramen soup packs at home, I also add fresh vegetables and egg. So, the soup may or may not have been completely scratch-made, but it’s darn tasty. It’s also a steal considering it’s size, inclusion of fresh vegetables, and the scrambled egg. I quickly ate the small dish of kimchi that came with the soup, and added the shredded cabbage to the ramen soup. This is a bowl I’d order again. 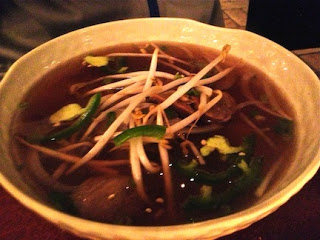 Jade Dragon is no longer the only place in Fargo-Moorhead to order pho. Cafe 21 offers both a chicken and beef version (FMFare spoke highly of the chicken pho). Jake enjoyed his bowl of beef pho. He said it was no Pho 79, but liked it better than Jade Dragon’s because the broth had more flavor and depth, to which I agreed. The bean sprouts, jalapeno, and Thai basil garnishes were also fresher and more plentiful.
In contrast, I liked the beef better at Jade Dragon. I prefer pho with thin, raw beef slices  placed in the hot broth. Cafe 21’s beef pho is prepared with slices of beef brisket and springy meatballs. Jake said he would return for this bowl of pho.
Lastly, we split flan, $4, for dessert. 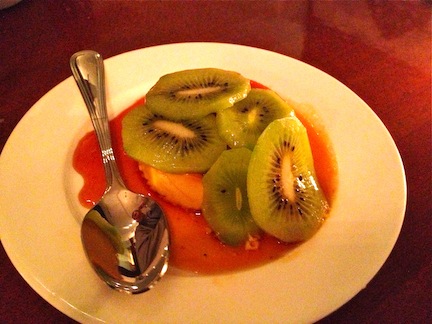 The creamy custard was covered with fresh kiwi and caramel sauce. The caramel sauce had a toasty, almost burnt taste to it and before we knew it, we were haggling over the last bite.
During our Friday evening visit, this new restaurant was turning over a steady stream of customers. The entrees seemed to lie in an expected price range, while many items were of a surprising value.
When we first ordered, Jake had his heart set on a bahn mi sandwich and learned they are only offered at lunch. Cafe 21’s menu only lists a roasted pork variety and it costs $7. This price is high by Twin Cities standards, but hey. It’s Fargo. When you’re (possibly) the only restaurant offering bahn mi’s, I suppose you can charge whatever you’d like. Plus the food costs here are much higher than the Twin Cities’. My only criticism is that I noticed a microwave sitting in front of the main window facing the parking lot.
This was one of those happy dining experience were everything just tasted really good. All of the dishes were prepared with fresh ingredients and thoughtfulness. The service was also warm and appropriately attentive.
We’re thrilled to see another restaurant in Fargo-Moorhead serving Vietnamese options and wouldn’t hesitate to return. Especially for their bahn mi at lunch.