I spent the weekend before Christmas in Seattle.

This was my fourth visit to Seattle. I first traveled to Seattle my senior year of college when I co-led a college service trip. We spent the week volunteering for Multifaith Works, a nonprofit dedicated to serving those with HIV/AIDS and other life-threatening illnesses. The nonprofit has since become Rosehedge/Multifaith Works and expanded their mission to also supporting those who struggle with isolation and loneliness.

I think it’s safe to say our whole group of students fell in love with Seattle upon arrival. Such a stark contrast to Iowa. From the steep hills to smooth public transportation systems to the diversity of food.

We experienced many examples of hospitality during this week. One man gave up his weeknight to take us to the grocery store when we arrived, and a church allowed us to crash in their basement and use their kitchen. We painted a house one afternoon. Later that evening, the landlord treated our whole group to a seven course feast at a Chinese restaurant in the International District.

Each course was an adventure. Fish maw soup that we were instructed to spike with a red vinegar and white pepper. Peking duck. Knots of salt and pepper fried crab that I clumsily poked with my chopsticks. Sweet and sour pork chops, and shrimp with walnuts coated in that sweet, mayonnaise sauce. Afterwards, his daughter led us to her favorite bubble tea shop.

For the first time, I came away with the understanding of travel mercies. I was humbled.

The focus of this most recent visit was to celebrate celebrate my friend’s marriage. We celebrated over frantic wedding preparations. While in transit. Over spicy Thai food. And deep, dark coffee.
While some danced at the reception, we non-dancing folk enjoyed hot, buttered rum. It was truly a whirlwind weekend and a beautiful wedding. And it involved making lots of chili.
The family found out I was in culinary school and asked if I could make a mild version of chili for 50 people with whatever was in the groom’s kitchen within a matter of hours.
As I began the mild version, I was asked to make a spicy version for 50 more people. I exclaimed, “I’m gonna chop the hell out of all these vegetables!” or at least, that’s what I’ve been told. I just remember feeling like I was on Chopped. Then things got messy.

Before leaving for the rehearsal dinner, we accidentally spilled at least half on the floor. The next day, we learned we left a large bag of it on the counter overnight. We quickly scrambled and fortified what was left. Hours before the wedding, I noticed a placard stating the chili was free from a multitude of allergens including soy. My eyes widened in panic because I remembered seasoning it with soy sauce I had found in the fridge.

We simply crossed out the word soy and all was well.
I did not think I would want to make chili for a long time. Which is why I was so surprised when I started craving chili when I got home. I think I wanted to share some of my experience with Jake who was unable to join me due to work. 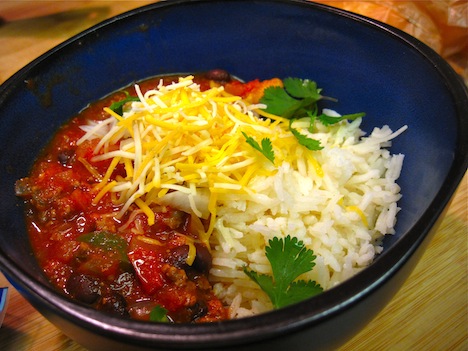