Although our Easter break is only a couple of weeks away, I felt antsy and wanted to go back home for a quick visit.

I enjoyed a somewhat leisurely Saturday morning and packed up for the Twin Cities.  Even at nine a.m., the fog swirled along I-94 E and made for a drive more amusing and beautiful than the norm.

Having done some prior research via Chowhound, I decided to make a quick breakfast stop in Freeport, MN at Charlie’s Cafe.  Freeport is located about 75-minutes from the Twin Cities and I have always admired it’s smiley water tower-like contraption and beautiful church steeple.

No one seemed to offer any glowing suggestions of breakfast joints along I-94 between the Twin Cities and Fargo, but mentioned Charlie’s Cafe for decent food, accessibility to the freeway, and that it’s supposedly the inspiration behind Garrison Keillor’s Chatterbox Cafe in Lake Wobegon.  It’s website also advertises free wi-fi.

The cafe was literally a few minutes from the freeway.  I admired the amiable, tiny main street and character of the beautiful, old homes.  Charlie’s Cafe was immediately visible due to it’s prominent signage.

The small restaurant was buzzing with families and friends enjoying each other’s company on a beautiful Saturday morning.  Although the restaurant aggressively advertises to weary road travelers on billboards along the interstate, Charlie’s seemed like a cozy gathering spot for locals.  Many of the diners appeared to be happy regulars or familiar with each other.

Once inside, I quickly seated myself, set up my laptop, and placed my order for coffee and a breakfast skillet that included hash browns, vegetables, two eggs, sunny side-up, and the meat of choice, ham.

My server quickly brought me a small pot of hot coffee and I gratefully poured myself a cup to ward of an increasing sensation of sleepiness.  I was happy to see little creamers at my table.  Real cream is best, little creamers are good enough, and powdered, dairy-free creamers are abhorable (for the record, I like my coffee blond and my espresso somewhat less blond). 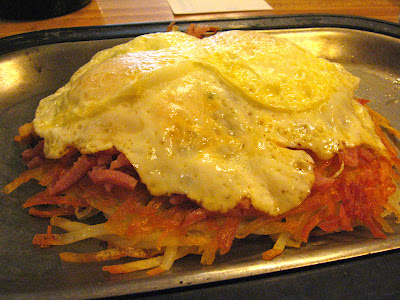 I tested one of the egg yolks and it ran liquid gold. 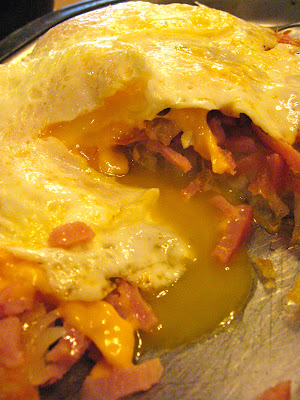 The exterior of the hash browns was delightfully crispy and interspersed with bits of ham, thin slices of onion, crispy green pepper, canned mushrooms, and melted American cheese.  I felt iffy about the canned mushrooms and American cheese, but appreciated the perfectly cooked eggs and the dish’s lack of visible greasiness.  In fact, all of the skillet elements, from the hash browns to the eggs, tasted rather light. . . as light as a breakfast skillet could possible be.

Not exactly haut cuisine, but the guilty-pleasure type of comfort food that hit the spot during my morning drive.

As a side note, I did my best to nonchalantly enjoy my meal while a table of local, male, senior citizens kept turning around to stare.  This staring activity didn’t seem to be hostile or overtly unwelcoming, but possibly curious.  I guess they may not see too many strange Asian girls with laptops in these parts.  That being said, I ate pretty quickly, as the experience felt a little awkward.  Mind you, these weren’t brief, curious glances (which I have become relatively oblivious to), but full-on, turning around in one’s seat to gawk.

I paid my tally which came to about $9.25, and returned to the road.

In conclusion, I felt the service was friendly and attentive and I also noticed the restaurant advertised German specialties served on Wednesday evenings between 4-8 p.m.  Maybe Jake and I can stop by for German food if we happen to be traveling to or from the cities.

Do you have any suggestions for food-related stops between the Twin Cities and Fargo?

Stay tuned for Solo Road Trip Home Part II where this Hunger Games virgin brings my family to Dong Yang for some amazing Korean food and stern Korean grandmothering, and suffers a near meltdown after seeing the film (a.k.a. omg, so that’s what they mean by “games”).


Going to be saved by this soup subscription this w

Just wrote a blog post about my latest craving. A

We wait all year for this 🍂

Figured out what to do with the fancy crystal bowl

First time for everything