Endless Shrimp Fail: The Red Lobster post you had always wished for.

My mother hated Red Lobster and Olive Garden with a passion.

One day, my parents finally caved in to my Red Lobster whining.  I don’t remember much about that visit except that I was disappointed.  The same thing happened at Old Country Buffet.  Fascinated with the buffet we passed by but never entered, and fueled by my parents refusal to dine there, I finally got my way.  Again, I remember feeling disappointed and perplexed that the soda pop and ice cream were the best tasting items out of an endless melange of fried chicken, fish, and roast beef.

Instead, our family’s chains of choice were Applebee’s and TGI Fridays, which we dined at on occasion, such as family birthdays.  One year, an overzealous TGIF staff flooded the birthday boy with boisterous singing and gratuitous balloon tying, making him cry.  From that day on, I was terrified I would be next, making a deliberate effort to choose a different birthday location.

In college, Applebee’s was like god, creating a stir when it opened a miniature location in Waverly, IA.  Students no longer had to make the 15-minute drive to the full-sized version in Cedar Falls that featured Tyler Florence’s attempt at a menu makeover.  For special occasions, we dined at the Olive Garden, as did all of the other student groups ranging from the band clique to athletic teams.  Usually, our attempts to dine at Olive Garden were squashed.  Weekday vs. Weekend?  Prime dinner time or 9 p.m.?  Think wait times up to an hour.

This weekend, we found ourselves near a Red Lobster in West Fargo during the fleeting season of Endless Shrimp.

Since childhood, I have only eaten at Red Lobster once where I waited amongst a hungry mob for at least 35-minutes while an ill woman regurgitated near my feet.

At 8 p.m., the West Fargo location was absurdly swamped, but at least it was puke-free.

After thirty minutes, we were seated and ordered endless shrimp for two. 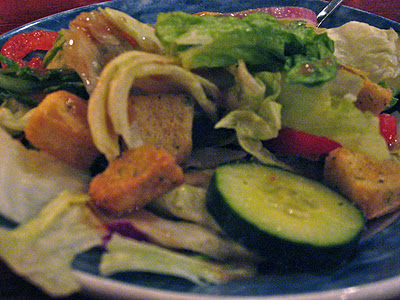 First, we were brought iceburg lettuce salads.  Unfortunately, my salad was drowned in a viscous, balsamic dressing, though the vegetables were fresh (no browning edges).  A good reminder to order my dressings on the side unless I’m at a restaurant that loves and cherishes their salads. 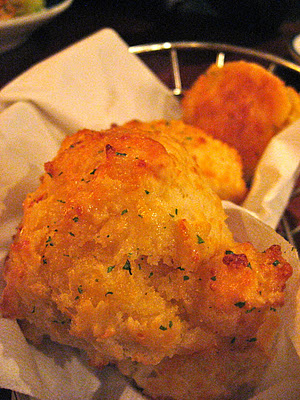 Is there anything left to say about the Cheddar Bay Biscuits?  Yes, I like them.  Yes, I am aware they taste of Bisquick, garlic salt, and oil.  Because of the high turnover, the biscuits were freshly baked.

I expected to only receive one portion of biscuits like our last visit but we were offered another full basket, which arrived quickly.  Suspiciously quickly.  Was the kitchen dragging its feet in order to stuff us with cheese biscuits?  Ploy or no ploy, we kept picking at the biscuits, aware our endless shrimp was on its way. 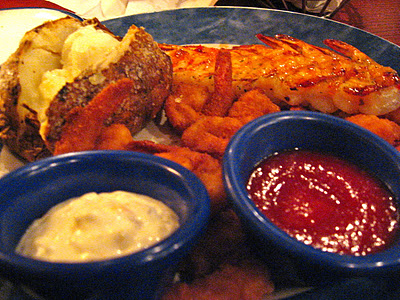 And here is where I begin my slow descent into endless shrimp fail.

The following skewer of grilled shrimp was lightly coated in a sweet and spicy sauce.  The sweet chili sauce just short of cloying and packed discernible heat for which I was thankful.  The glaze was actually spicier than the dish I requested as “extra spicy” from a local Thai restaurant and the shrimp were not overcooked, preferable to the other shrimp variations. 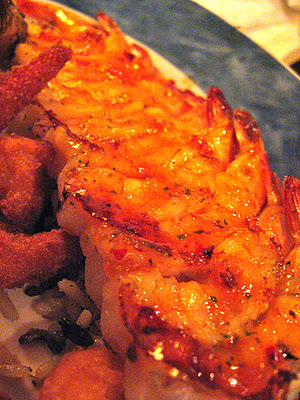 I did not enjoy that the shrimp sat on top of a generic, seasoned “rice pilaf,” the type I grew up eating from Uncle Ben’s boxes and school cafeterias.  The rice pilaf that had made me believe I hated wild rice until I actually tried real wild rice.

The fried shrimp were fine.  The crumb breading was kind of soggy, but the shrimp tails were crisp.  They tasted more of salt and breading than shrimp, but were acceptable.  I probably don’t need to remind you that I’m a sucker for fried foods.  Any fried foods.  And unless they are horrifyingly disgusting, I will probably eat them.

I did not try Jake’s portions of shrimp scampi and Parmesan crusted shrimp. 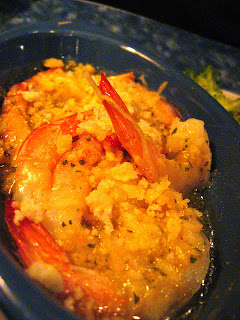 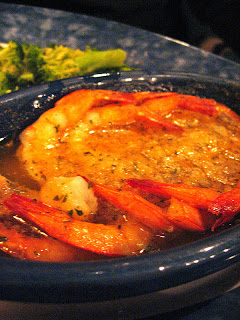 Previously, I found the buttery sauce to taste slightly chemically. 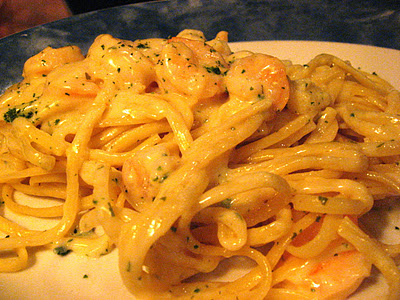 The shrimp fettuccine consisted mostly of pasta dotted with small shrimp, and coated in a thick, creamy sauce that struck me as cheesy and incredibly salty.  I have a high tolerance for salt, but would not have been able to take more than a few occasional bites of this pasta.  On a positive note, the pasta was cooked al dente.

Also, our waitress was amazing.  She mentioned witnessing a college student consume 250 shrimp.  Apparently, the “endless” part of endless shrimp is meant to be taken literally.

I became full about two thirds into my first plate.  And so endeth the endless shrimp.