There is a first time for everything.  I have never eaten at a new restaurant and planned to return as soon as possible, that same week.  I would have eaten at Surabhi two days in a row if it had been possible.

Surabhi offers a lunch buffet for $8.95 every day except Tuesday.  We were told we could not order off the menu during the lunch buffet.

The buffet offered approximately four meat dishes.  I sampled a creamy dish with bite-sized pieces of boneless, skinless chunks of chicken.  The sauce was a mildly spicy curry, gravy of some sort and the chicken was tender.  I also tried a small spoonful of goat curry.  I remember the curry being tasty and not memorably spicy.  The boneless piece of goat was very tender and almost reminded me of slightly gamy beef.

Also offered was a selection of pickles, a mild coconut chutney, and various spicy sauces.  The coconut chutney tasted more of the earthiness of coconut, as in coconut water rather than coconut shrimp.  I tried Rasam, which the website describes as a sweet and spicy tamarind-flavored soup.  Personally, I found it to be decent, but a bit thin and mild.  The Palek Paneer made of spinach and small cubes of cheese was addictive.  The gravy seemed richer and spicier than other versions I have tried.  The lentil daal was also very flavorful and spicier than other daals I have tried.

I tried the Gobi Manchuria, fried pieces of cauliflower coated in a sweetish chili sauce.  The sauce was more sweet than spicy and the cauliflower was a bit soggy though I didn’t mind.  The only other time I tried Gobi Manchuria was at the annual Indian Festival located in Downtown Saint Paul where it was slightly saucier and soggier.  The naan was delicious,  reminding me of the scallion pancakes at Grand Szechuan because it was a bit oily (in a good way), and almost flaky.  Besides soaking up the rich and spicy gravies with naan, I also enjoyed trying the dosas, thin rice crepes the size of a plate.

I have never eaten at a South Indian restaurant so I can not compare my meal to other South Indian restaurants.  All I can say is that the food tasted richer and spicier than the North Indian restaurants I have tried in the Twin Cities area.  I read a review from the Minneapolis and St. Paul Restaurant Critics Blog that was not so impressed with Surabhi.  In comparison, I would agree that most of the dishes were served at a lukewarm temperature and that the rice crepes may have been made a head of time, but the buffet food was actually spicy and tasted so good that I wasn’t that bothered by serving temperature.

And so I return with my significant other.  We ordered the following for take-out:

Dinner entrees can be ordered as a Thali meal, meaning entrees include plain naan or poori, daal, sambaar, rasam, raita, and rice, sweet mango chutney or spicy carrot chutney and dessert.  We did not specify Thali preferences and received a generous portion of naan, basmati rice, and kheer which was a sweet rice pudding with cashews and fruit.  When I return, I will definitely specify that I would like to try both the mango chutney and spicy chutney which were not offered upon ordering or included in our order. 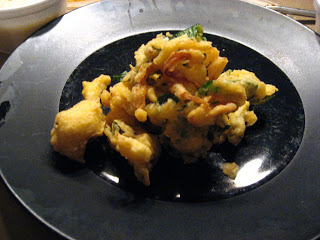 An extremely generous serving of mixed vegetable pakora was packaged in a paper bag, allowing the vegetables to remain extremely crispy and free from grease.  (I am annoyed by restaurants that don’t show their fried take-out orders the “love” they deserve by packaging them in airtight containers which steam the fried foods, making them soggy).  The vegetables filled most of a large paper lunch sack and were comprised of fried spinach, mild chiles, thin slices of red potato, eggplant, and onion strings. 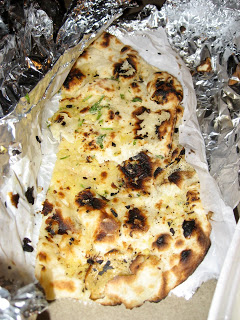 We received two pieces of garlic naan in our order.  The naan, in general, was thicker and chewier in some places while it was crispier and slightly charred in others, which I find appealing.  The garlic naan was appropriately garlicky.  The side order of plain naan which came with our Thali meals included at least four pieces of naan. 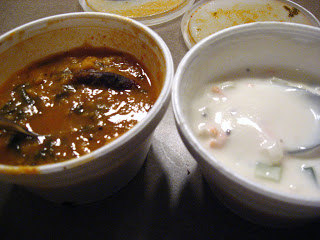 The order took 45 minutes-1 hour to complete so I was ravenous by the time we returned home and only took a picture of two of the condiments.  The daal was as flavorful and spicy as in the buffet.  And by spicy I mean, “has a nice kick” as opposed to “blow your head off.”  The raita was on the runny side and surprisingly sweet.

Sidenote: A couple of years ago, I took an interesting cooking class at The Indian Foods Company located in Osseo.  The class was situated in a small, Indian food and spice shop in Osseo, owned by an Indian family who grinds their own spices and creates their own spice mixtures.  The class was taught in a cozy corner of the shop with a small demonstration kitchen surrounded by a counter and seats.   I was among about 5 classmates.  We learned how to make basmati rice flavored with toasted spices such as mustard seed and chiles and lime in addition to tandoor chicken made on the grill, raita, aloo gobi, and yogurt sweetened with cardamom rose sugar.  I remember I was stuffed to the point of being sick, bought some affordable spice blends, and successfully recreated some of the recipes.  The raita was made was of thick yogurt such as fage, diced red onion, cilantro, lime juice and salt.  Maybe the sweetness of Surabhi’s yogurt is regional?  I think I prefer the savory version. 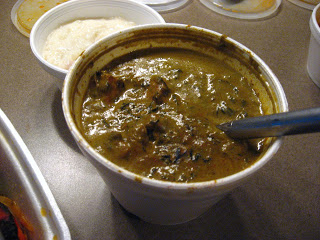 I ordered this dish extra spicy and Surabhi delivered.  My significant other and I love spicy foods and are often disappointed when we order food extra spicy and it is mild.  Unlike the buffet, this palek paneer packed more heat.  The gravy and firm cubes of cheese were still delicious.  This entree was the spiciest thing I have eaten for years, including everything I have eaten at Bangkok Thai Deli.
Tandoor mixed grill 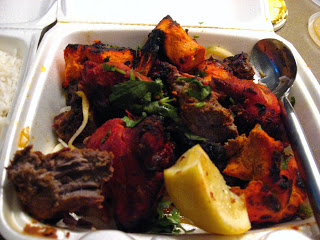 The tandoor mixed grill included lamb, white and dark meat bone-in chicken, “minced and spiced” lamb kabob, and shrimp.  If there were more types of meats, my S.O. beat me to the punch.  The meat was placed on top of thinly sliced, raw onions and garnished with a large lemon wedge.  Of the meats I did try, the lamb was coated in a spicy marinade and was very tender.  It was my favorite meat, and not very gamey.  The dark meat chicken was tender and moist and the lamb kabob was also good.  In a couple pieces of the kabob, the spices were a bit overwhelming.  It seemed like I was biting into whole spices.  Otherwise, the flavor of the lamb itself was very good.  Everything tasted even better with a squirt of the lemon and the partially cooked, meat juice-soaked onions at the bottom of the container.
I enjoyed the other condiments that had also been present at the buffet, which were mild and tasted good when I dipped the naan into them.  The rice pudding was especially comforting and delicious.  I am not especially a fan of pudding, rice pudding, or tapioca, but enjoyed the rice pudding.  All in all, I was very satisfied with our meal and feel it was a generous value.  Due to the wait time, I would recommend calling in an order if picking up.  We ordered on Saturday around 5:30, and there were a few other families in the restaurant.


These are getting harder and harder to take!

When it’s on the way home from daycare 😃 I lo